Patient will present as → a 28-year-old Caucasian female complaining of a one-week history of fatigue, progressively worsening shortness of breath, and swelling of her feet and ankles. She denies any chest pain. Her past medical history is unremarkable except for a recent cold two weeks prior to this presentation. She denies any past surgical history. She takes oral contraceptive pills as her only medication. She denies any recreational drug use. On physical exam, her temperature is 37 C (98.6 F), blood pressure is 120/70 mmHg, pulse is 84/min, and respiratory rate is 20/min. Her physical exam is also notable for bibasilar crackles, jugular venous distension, an S3 gallop (heard below), and 2+ pitting edema up to the ankles bilaterally. Her electrolytes and complete blood count are within normal limits. CXR reveals cardiomegaly with pulmonary congestion, EKG shows nonspecific ST and T wave changes, and echocardiography demonstrates left ventricular dilation and dysfunction and low cardiac output.

Dilated cardiomyopathy is the most common type (95%) of cardiomyopathy and is a condition in which an index event or process damages the myocardium, weakening the heart muscle resulting in reduced strength of ventricular contraction, and dilation of all four chambers of the heart 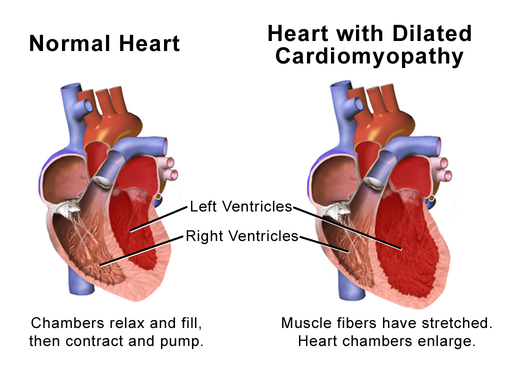 Echocardiography is the most definitive diagnosis - demonstrates left ventricular dilation and dysfunction and low cardiac output with poor EF (< 50%, but often less than 30%) Dilated cardiomyopathy is a disease of the heart in which the heart becomes weakened and enlarged, and is unable to pump blood efficiently throughout the body. Therefore, it is commonly described as a contractile or systolic dysfunction. This is the most common form of cardiomyopathy not due to ischemic causes. Although many cases are idiopathic, it is thought that dilated cardiomyopathy is related to damage of the myocardium produced by toxic, metabolic, or infectious agents. Common causes of dilated cardiomyopathy include chronic alcohol abuse, wet beriberi related to thiamine deficiency, coxsackie B infection, cocaine use, Chagas disease, doxorubicin toxicity, hemochromatosis and peripartum cardiomyopathy. On physical exam, an S3 heart sound can be appreciated, due to turbulent blood flow between the walls of the ventricles, as blood flows from the atria in the volume overloaded heart. Dilated cardiomyopathy is also characterized by eccentric hypertrophy in which cardiac sarcomeres are added in series as opposed to parallel. Loop diuretics are a class of diuretics that inhibit the Na-K-2Cl symporter in the thick ascending limb of the loop of Henle. Furosemide is the generic name for one of the most commonly used loop diuretics and is also known by the trade name, Lasix. These drugs are sulfa drugs, as they contain a sulfonamide group and can cause allergic reactions in patients with sulfa allergies. Loop diuretics often also lead to electrolyte abnormalities, such as hypokalemia and hypocalcemia. Additionally, these drugs can reduce urate excretion, leading to hyperuricemia, and subsequently gout. Ototoxicity is also a serious, but rare adverse effect of loop diuretics. Selective β1 blockers are drugs that act to block β1 adrenergic receptors and typically treat cardiovascular diseases. They work to block the actions of norepinephrine and epinephrine on cardiovascular contractility, chronotropy, and the body’s release of renin. These drugs can be remembered by having the “olol” suffix in their names, such as atenolol, esmolol, and metoprolol. Some β1 blocking drugs also work as partial β agonists at high doses, such as acebutolol. Nonselective β-blockers were the first generation β-blockers and have antagonistic effects at both β1 (heart, kidney) and β2 receptors (lung, peripheral blood vessels and skeletal muscle) thus preventing direct sympathomimetics such as norepinephrine and epinephrine from binding to these receptors.

ACE inhibitors are antihypertensive drugs that work by inhibiting the renin-angiotensin-aldosterone-system. They help to lower blood pressure by inhibiting angiotensin converting enzyme and decreasing the amount of angiotensin II and aldosterone. Effects of inhibiting this conversion are translated into lowered arteriolar resistance, and increased venous capacity. This drug class decrease cardiac output and index, and stroke volume. Furthermore, natriuresis is increased, while there is decreased resistance in the blood vessels of the kidney. A side effect of these drugs is increased bradykinin, which may display as a persistant dry cough in patients.

What chambers are affected in dilated cardiomyopathy?
Question 1 Explanation:
In dilated cardiomyopathy there will be enlargement and dilation of all four chambers
What is the most common cause of non-ischemic DCM in the US?
Question 2 Explanation:
Chronic alcoholism is the most common cause of non-ischemic cardiomyopathies in the US. Ischemic cardiomyopathy is the #1 cause of dilated cardiomyopathy and more than 60% of patients with heart failure have this.
A 50-year-old male with history of alcohol abuse presents with complaint of worsening dyspnea. Physical examination reveals bibasilar rales, elevated jugular venous pressure, an S3 and lower extremity edema. Chest x-ray reveals pulmonary congestion and cardiomegaly. Electrocardiogram shows frequent ventricular ectopy. Echocardiogram shows left ventricular dilatation and an ejection fraction of 30%. Which of the following is the most likely diagnosis in this patient?
Question 3 Explanation:
Dilated cardiomyopathy is often caused by chronic alcohol use. It is characterized by signs and symptoms of left-sided heart failure, a dilated left ventricle and decreased ejection fraction.
There are 3 questions to complete.
Return
Shaded items are complete.
Return
You have completed
questions
question
Your score is
Correct
Wrong
Partial-Credit
You have not finished your quiz. If you leave this page, your progress will be lost.
Correct Answer
You Selected
Not Attempted
Final Score on Quiz
Attempted Questions Correct
Attempted Questions Wrong
Questions Not Attempted
Total Questions on Quiz
Question Details
Results
Date
Score
Hint
Time allowed
minutes
seconds
Time used
Answer Choice(s) Selected
Question Text
All done
Need more practice!
Keep trying!
Not bad!
Good work!
Perfect!